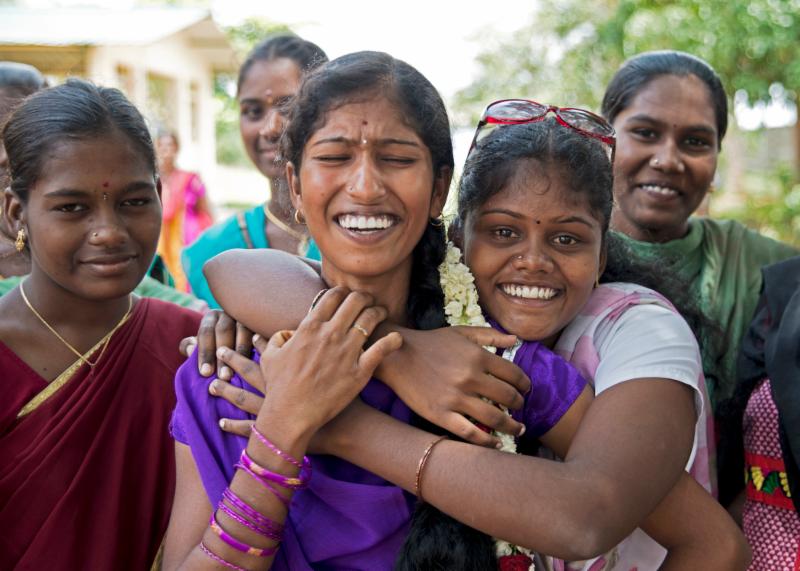 Truthfully, I don’t believe most of us who live in the west truly understand the abiding appreciation the young village women have when they learn they have been accepted into the Community College Nursing Program.

Maybe the best illustration I can pass along to you is the overwhelming panic of drowning.  Think of being held under water until you could hold your breath no longer.  Fighting to the surface you knew someone would quickly push you back under over and over.  This would continue until you simply gave up and took your last breathe.

All of these women are from the poorest of the poor.  Most have graduated from the 12th Standard (high school) with good marks but their families either did not have the money or desire to allow their daughters to continue their studies.  Hope for a better life quickly faded into the reality their destiny would be to either work in a sweat shop or as a day labor for less than a dollar a day.  Many times having to endure physical and sexual abuse just to keep your job.  Some of the other women were quickly married (arranged) at 17 or 18 so they would no
longer be a burden to their family.  Once married, these girls would become the maid servant to their in-laws and the expectation to conceive a son is solely their burden.

Then our Community College staff visited their village.  They were told that they could qualify for a scholarship for tuition and for those that needed housing they could live on campus.  Their share of the tuition costs would also be deferred until they graduated and were earning a good wage.

Once they complete their studies (2 year course) and passed their exit exam, there would be a good, respectable and safe job waiting for them in a medical clinic or hospital.  They would be earning more in one month than they would have in an entire year!

We are also equipping these students to become the healthcare advocate for her village.  She will be trained to be the prenatal and newborn care coordinator.  Consequently, she will not only be a financial asset to her family but she will be seen and valued by her community.

Sixty-five young women have enrolled and will be attending school at either our Danishpet or Pennegaram campuses.  Classes are starting this month.

The cost to fully sponsor one of these deserving young women is $400 per year for her tuition, books and a school uniform.  On campus housing which includes room and board and 3 meals per day is $250 for the entire school year.

This is our challenge.  Truly, it is an opportunity to change the destiny of a young Indian women.  It is inspiring to witness the transformation of these young women.  Many times they do not look like the same person.  History has proven, for those young women that have children, upon graduation and their new employment one of the first things they do is put their children in a quality school where they can get a great education.

This is how we end female infanticide.  We lift her out of despair and she will end future gendercide in her immediately family and potentially an entire village.   Each of the last four years we have seen this happen again and again.

Glory (seated) is the principal of the Community College at Bethel AFC.  She oversees both the Danishpet (home) and Pennegaram campuses.  Presently, we have 65 young village women studying to become nursing assistants.

Glory’s parents worked for Bethel AFC, and Glory attended and graduated from the Matriculation School at Bethel.  She earned her college degree in nursing and was working in the city of Bangalore earning a very good wage.  Her husband, Franklin, was also a successful business manager with a good position with a business in Bangalore.  They are parents to an energetic 3 year old boy.  They were living the “Indian dream!”

Then the call came.  Glory’s father was killed one afternoon last year while traveling on a two-wheeler (small motorcycle) on his way into town.  Glory and Franklin made the career-changing decisions to return to the small town of Danishpet and stay with her mother.

Bethel hired her to help teach in our Community College of Nursing.  This spring, Glory was promoted to be the principal of both campuses as well as to expand our new hostel for nursing students.  Watching her teach and lead her team is like watching a maestro conduct an orchestra.  Awe-inspiring is not an overstatement of her abilities and God-given talents.

Priya is just as talented.  A few years ago she started a pre-school for the families living in her community outside of Pennegaram.  Today, the school has nearly 60 students and includes children in pre-school, kindergarten and 1st standard.  Two years ago Priya began offering the nursing assistant program and it is now filled to capacity.

Last month, when I was in India, Priya was sharing her vision.

“See this land behind our fence… we need to purchase it so I
can build a community college and offer many different courses
to help women succeed.  This would allow this side to be
dedicated to offering a Matriculation School through the
8th standard!”

I have no doubt Priya’s dream will become a reality.  She is just that gifted and dedicated!

With talent and inspired young women like this on our team, how can we not be excited about the impact we will be making and the future of the Indian girl?  This is why we ask for your support.  Please consider making a one time contribution or providing a scholarship for one of these young women enrolled in the Community College.